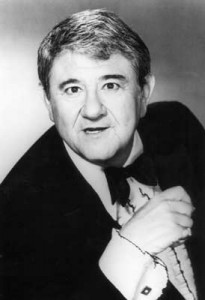 Comedian began performing in nightclubs in the Catskills Borscht Belt resorts while he was still in high school. During World War II he enlisted in the Army ans served as an anti-aircraft battery.

His first job following the war was at the Pink Elephant, a club in Brooklyn. It was for this job that he changed his mname from Leonard Hacker to Buddy Hackett. He continued performing in the Catskills and Las Vegas. Appearing on Broadway, Max Liebman saw him and put him in two television specials. He was asked to replace Curly in The Three Stooges. He turned down the role. But later he replaced Lou Costello when Costello was forced to withdraw from filming Fireman, Save My Child due to illness.

Hackett started in Stanley, one of the last live television sitcoms with Carol Burnett and Paul Lynde. He later appeared The Music Man with Robert Preston and Shirley Jones.

He became widely known in the 1963 It’s a Mad, Mad, Mad, Mad World and later played the lovable mechanic Tennessee Steinmetz in Disney’s The Love Bug.