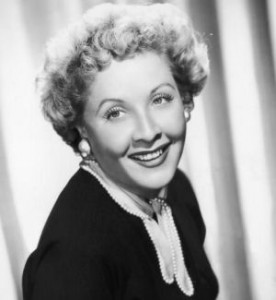 We knew her for years as the loveable neighbor, Ethel Mertz on I Love Lucy. and then Lucy’s best friend Vivian Bagley on The Lucy Show. Vivian Vance, born Vivian Roberat Jones was born on July 26, 1909 in Cherryvale, Kansas.

She began her acting career as a founding member of the Albuquerque Little Theatre. The local theater community believed in her so much they raised money to help pay her way to New York to study and act.

Vance made her Broadway debut in 1932, and appeared in multiple productions, usually as a member of the chorus. She played the role of Nancy Collister along side Danny Kaye and Eve Arden in Cole Porter’s Let’s Face It! The show ran for over 500 performances.

In the late 1940s she moved to California to pursue a film career. As they were casting I Love Lucy, Desi Arnaz saw Vance perform in a local theater and was convinced she was the right person to play Ethel Mertz. Lucille Ball was less certain but eventually agreed and an amazing television duo was created.

In 1954, Vivian Vance became the first actress to win an Emmy for “Outstanding Supporting Actress.”