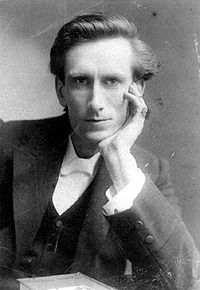 Oswald Chambers was a Scottish minister and teacher. Most Christians know him today for his collected writings in “My Utmost for His Highest.” However, while more than 30 books bear his name, he only wrote one Baffled to Fight Better.

Chambers served as a YMCA chaplain during World War I. He traveled extensively to Egypt, Japan and America where he met his wife.

Following his death in 1917, Chambers wife Gertrude “Biddy” Hobbs Chambers published the bulk of his works.

Chambers died in Egypt on November 15, 1917 from a ruptured appendix. He delayed medical treatment for three days, refusing to take the beds of wounded soldiers.