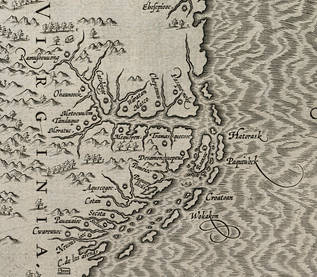 1597 Map of the Outer Banks of Carolina showing Roanoke Island

On this day in 1587, a second group of English settlers arrived at Roanoke Island in what is now North Carolina. They came to re-establish the deserted colony. The first attempt at a settlement had been led by Ralph Lane in 1585.

Leading the second attempt was John White, the father of colonist Eleanor Dare and the grandfather of Virginia Dare. Virginia Dare was the first English child born in the New World.

White returned to England for much needed supplies. His return was delayed for three years due to the war with France. When he returned he found the colony abandoned. The only clue White found was the word “CROATOAN” that was carved into a tree. CROATOAN was the name of what is now Hatteras Island.

White tried to search for the colonists, but weather prevented his trip. He eventually returned to England not knowing what had happened. He died in England without an answer.

The settlement became known as “The Lost Colony.”

Today, the story of The Lost Colony is told in a musical drama on Roanoke Island. The Lost Colony is America’s longest running outdoor drama. It is performed on summer nights by a company of more than 100 actors, dancers and crew.