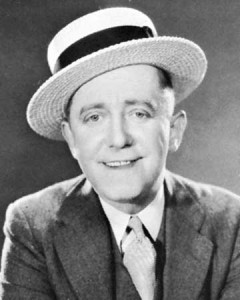 Born on the 3rd of July.

George M. Cohan was an American entertainer, playwright, composer, lyricist, actor, singer, dancer and producer. He began his career performing with his parents in a vaudevilel act known as “The Four Cohans.” He later appeared in more than three dozen Broadway musicals.

Cohan wrote more than 500 songs, among them “Over There,” “Give My Regards to Broadway” and “You’re a Grand Old Flag.”

His life and music were depicted in the Academy Award winning Yankee Doodle Dandy in 1942 and the 1968 musical George M!

“A beloved figure is lost to our national life in the passing of your devoted husband. He will be mourned by millions whose lives were brightened and whose burdens were eased by his genius as a fun maker and as a dispeller of gloom. My heartfelt sympathy to you and all the family.”