The United States Military recently revoked approval for B&H Publishing, a division of LifeWay Christian Resources of the Southern Baptist Convention to use military logos on their four versions of the Holman Christian Standard Bible, one each for the Army, Navy, Airforce and Marine Corps.

Partially in response to a complaint from the Military Religious Freedom Foundation approval for the logo use has been withdrawn. An MRFF spokesman said “It totally savages one of the most basic Department of Defense regulations that exists. It does not allow the endorsement of a non-federal entity by the Department of Defense.”

Each Bible was tailored specifically for the respective military branch. Approval of the logo use had been given in 2003. Last year, B&H Publishing started receiving notices from the respective branches that approval had been withdrawn.

Perhaps though the MRFF had a problem with the Bibles, not because of the Scripture, but because these versions also contained devotionals and essays tailored for each branch. Also among the pages you can find the Pledge of Allegiance, the fourth vers of the Star Spangled Banner (which includes the horrific phrase “In God do we trust.”), excerpts from George W. Bush’s inaugural address and General George S. Patton’s Christmas prayer card. 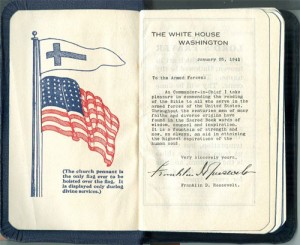 This message from FDR was included inside copies of the New Testament given to WWII soldiers.

This, Weinstein says until all of these are gone, “they’re still aiding and abetting the cause of al- Qaeda.”

The Department of Defense states that the withdrawal of approval was strictly a trademark issue and had nothing to do with religion. According to Fox News, a LifeWay spokesman said the publisher now uses generic insignias instead of official emblems and that the Bible continues to sell well.

In reality, while regrettable, the military made the right decision with regard to the logos. But their use was not, as Weinstein said, “another raging example of this cancer.”

And then, there’s this: 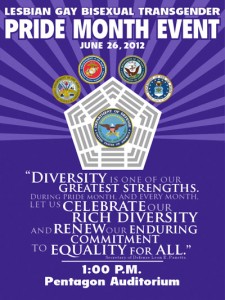