Gingrich: To the Moon, Alice! 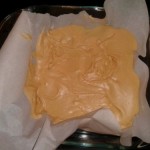 Last weekend, I tried a recipe I found on Pinterest.

The directions were simple. Take one can of frosting and one bag of chocolate chips. Melt them together in the microwave, pour them in a dish and two hours later…fudge!

Only mine turned out to be a mess. Somehow the oil in the icing separated and congealed on the top. The taste wasn’t bad, but the site was pretty nasty.

Instead of melting both the icing and the chips, I melted only the chips and then stirred in the icing. Not bad at all.

The picture doesn’t do it justice because the pan was a bit large. But this recipe is (now) a keeper.

But the possibilities are endless. Think of all the flavor combinations of icing and fudge.

I could go on…