The One Where We Agree with the ACLU 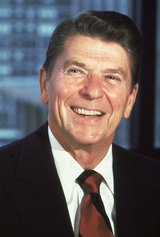 One of the least credible tales to come out of President Obama’s recent ideological makeover is the story that he is modeling his presidency on Ronald Reagan’s. Time Magazine asserted this week that “there is no mistaking Obama‘s increasing reliance on [Mr. Reagan’s] career as a helpful template for his own.” Just to keep this preposterous public relations ploy in perspective, we have compiled a handy list to remind people how little these two men have in common:

There’s a story here. I’m not sure what it is,